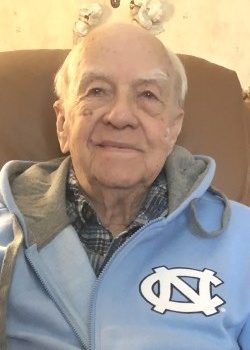 A native of Barnardsville, Mr. Carter was a son of the late Hargrove and Cora Styles Carter. He was also preceded in death by the love of his life and mother of his children, his wife Annie Lou Carter, and by his son-in-law, Bob Bentley. He is the last surviving of 7 siblings.

Mr. Carter was a veteran of the U.S. Army, serving in WWII. He attended First Baptist Church of Robbinsville, and retired from the U.S. Postal Service.

Funeral services for Mr. Carter will be held at 3:00 p.m. on Saturday, February 8, in the Patton Avenue chapel of Groce Funeral Home, with Pastor Noah Crowe officiating. Interment will follow at Oak Forest Presbyterian Church Cemetery.

Due to his love of reading and community, donations may be made to the Friends of Graham County Library, 80 Knight St., Robbinsville, NC 28771.