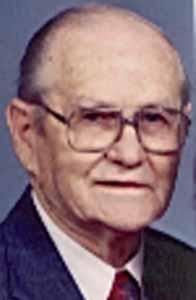 Mr. Koontz was born December 26, 1913, in Asheville, and was a son of the late Ernest G. and Celestia Putnam Koontz, and Fannie Williams Koontz. He was also preceded in death by a son, Harry Eugene Koontz, a brother, Raymond Koontz, and sisters, Edna Koontz and Margaret Kirby.

He retired in 1979 after 34 years with Thomas & Howard Wholesale Grocer Co. He was an active member of West Asheville Baptist Church where he taught Sunday school, served as deacon, and held other positions of leadership.

Funeral services will be 3:00 pm Sunday in the Patton Avenue chapel of Groce Funeral Home with the Rev. Dr. James H. Johnson and the Rev. Ken Lewis officiating. Burial will be at Forest Lawn Memorial Park.

His family will receive friends at the funeral home one hour prior to the service Sunday afternoon.

In lieu of flowers, memorials may be made to the West Asheville Baptist Church Building Fund, 926 Haywood Road, Asheville, NC 28806.