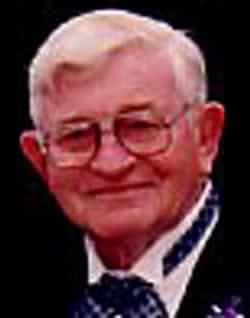 Richard Irving Holdredge, 78, of 2 Highlander Road, Woodland Hills, Asheville, died Thursday, July 10, 2003, in an Asheville hospital. Mr. Holdredge was born in Groton, CT, and was a son of the late Frederick and Gertrude Wright Holdredge. He was married to the late Helen White Holdredge and was also preceded in death by a son, Richard Mark Holdredge. He was a graduate of the University of Connecticut and served as a 1st Lt. with the Army Air Corps during WW II, a decorated B-24 bomber pilot receiving the Distinguished Flying Cross. He was retired from Akzona Corporation as Director of Information Systems and was a former scout master with the Boy Scouts in Long Island, NY. Surviving are a daughter, Melissa Murray of Weaverville; two sons, David Holdredge of Weaverville and Paul Holdredge of Weaverville; a sister, Eleanor Sangren of Groton, CT; nine grandchildren and three great-grandchildren. Graveside services will be 11:00 am Saturday at Green Hills Cemetery with the Rev. Kevin McMillan officiating. His family will receive friends from 7:00-9:00 pm Friday at Groce Funeral Home on Patton Avenue.