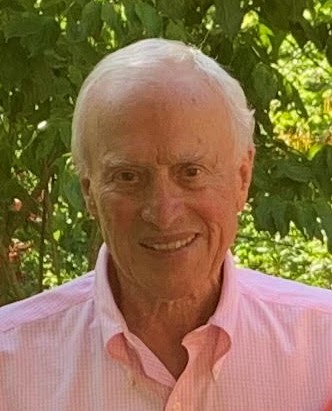 He was born in Suffolk, England, on December 31, 1938, and he was educated at the Culford School (West Suffolk). Dick was captain of the rugby team and the Head Boy at Culford. He continued his education at the University of Bristol where he graduated with a degree in chemistry.

Dick pursued a career in chemistry at Shell UK, ICI Americas, and International Paper. While at Shell, he did research in structural applications of polyurethane and advanced the use of microwave technology for rapid uniform industrial thermal fixation. During his time with International Paper, Dick and family lived in Brussels where he headed the European sales team for several years.

In England, he has two sisters, Elizabeth (Libby) Balch and Gillian (Gill) Payne. In addition, he has five nieces in England and one nephew in Australia.

In retirement, Dick became a well-known painter (oil and acrylics) of landscapes and townscapes in Washington, DC and the tidewater region of the Chesapeake Bay. He served two terms as President of the Washington Society of Landscape Painters, one of the United States’ oldest fine arts organizations.

He was a member of Trinity Episcopal Church and Biltmore Forest Country Club. His joy was playing golf and tennis. Donations can be made to the Church of the Advocate to assist the homeless of Asheville– 60 Church Street, Asheville, NC 28801.

A memorial service will be held later to honor his life.