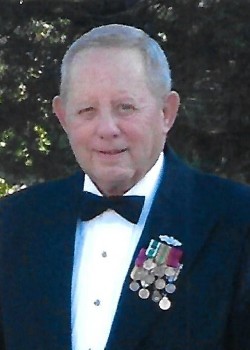 Richard Manville Biggs, a life-long resident of Buncombe County, passed away on April 6, 2022 after a long battle with cancer.

He is survived by his wife of 9 years, Janet; his daughter, Beth Myrick (Ken); son, Richard Lee Biggs (Marie); and grandchildren, Kyle, Sean, Wesley and Laura. Richard is also survived by three of his six brothers, Joe, Jack (Rita) and Ted (Diane).

He is preceded in death by his brothers, Cecil, Bob and Larry Biggs, and his wife of 43 years, Virginia Queen Biggs.

Richard was active in the military for 30 years after joining the Marine Corps in 1960. After boot camp and training, he attended Artillery Survey School. He then served six months on a ship and was at Guantanamo Bay, Cuba during the Cuban Missile Crisis in 1962. In 1963 he was transferred to the Third Marine Division on Okinawa, Japan. While stationed there, he was deployed to Korea, the Philippines and to South Vietnam as an advisor to the South Vietnamese Marine Corps artillery. After his Pacific tour, he returned to Camp Lejeune, NC in 1964 and was assigned to test fire proposed new rifles until he was discharged that year.

During his reserve service he was the owner of Hutchison Biggs Surveying until retirement.

Graveside services with military honors will be held at 2:00 p.m. on Tuesday, April 12, at Green Hills Cemetery, with Chaplain Brian Williams officiating.

The family will receive friends from 1:00 to 2:00 p.m. on Tuesday at Groce Funeral Home on Patton Avenue.

In lieu of flowers, please consider making a donation to the American Cancer Society.