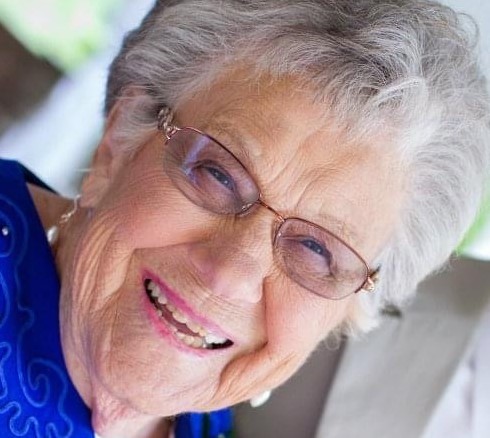 A native of Spartanburg, SC, she was a daughter of the late Paul and Pauline Henderson Roddy. Rita was also preceded in death by two husbands, Lee Roy Ball and Norman Black; one sister, Margaret Roddy Hunnicutt and four brothers, Bill Roddy, JW Roddy, Donald Roddy and Cecil Roddy.

Rita’s last public job was an inspector at Anchor Brush in Morristown, TN. She was forced to quit school at age 15 due to family hardship and helped to raise her brothers and sister, as well as serving as a caregiver for their mother. Rita loved the Lord, her family and listening to gospel and country music. She also enjoyed gardening, flowers, crafts and travel.

Rita lived in Fairview for about 20 years, then in Flagstaff, AZ for 10 years, Morristown, TN for 54 years and then back to Fairview for the final 8 or so years of her life. When Rita returned to Fairview, everyone there remembered her as Mrs. Rita Ball.

She was the life of any gathering. She enjoyed her time at Fleshers Nursing Home, being surrounded by family, staff and other residents there. When Fleshers brought “Elvis” in to visit the residents, she would get up and dance with him. Precious are the many stories that the staff and residents have shared with Rita’s family.

A Funeral Service to celebrate Rita’s life will be held at 12:00 PM on Monday, February 14 in the Chapel of Groce Funeral Home at Lake Julian in Arden with Pastor Mike Anderson officiating. Burial will follow the service at Cane Creek Cemetery with Nathan Ball, Brent Bell, Joey Hunnicutt, Van Draper, Bill Moody and Wayne McElrath serving as pallbearers. Rita’s family will greet friends at the funeral home on Monday from 11:00 AM until the service begins at 12:00 PM.

Flowers are appreciated or memorial donations may be made to Fleshers Nursing Care Staff Fund, 3016 Cane Creek Road, Fairview, NC 28730.