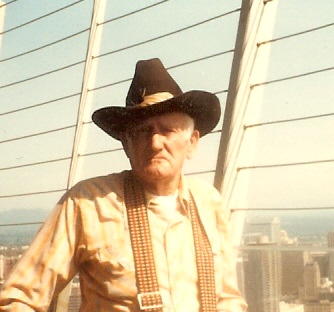 Mills River ~ Robert Lee Ezell, 94, of South Country Lane, Mills River, passed away on Friday, November 20, 2009 at his residence. He was born in Geneva County, Alabama and was the son of the late Allen W. Ezell and Roxy Clark Ezell. He was preceded in death by his wife Alvema Benefield Ezell in 2008 and two daughters, Minna Lou Ezell and Rita Henderson and two sons, Clyde and Mickey Ezell. He worked most of his life in construction. He is survived by three daughters, Gloria Faye Padgett of Bellflower, CA, Patricia Roman of Bonney Lake, WA and Judith Roland of Mills River; twenty-seven grandchildren; sixty-seven great-grandchildren and thirty-five great- great- grand-children; one brother, Richard Ezell of Live Oak, Florida. A funeral service will be held 2:00 P.M. Monday in the chapel of Groce Funeral Home at Lake Julian. Burial will follow in Shepherd Memorial Park. The family will receive friends from 1:00 P.M. to 2:00 P.M. Monday prior to the service at the funeral home.