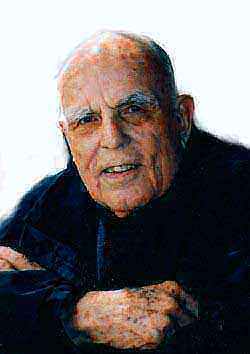 Robert Moore Morris, 95, of Asheville, passed away Tuesday, November 18, 2008 at his residence. Born in The Heights, Houston, TX, on August 13, 1913, he was the son of the late Barney Lockhart and Nancy Jane Moore Morris. His father was a minister in the Christian Church. Mr. Morris grew up in Texas, Oklahoma, Kansas and Missouri. He graduated from high school in 1931, in St. Louis. He then moved with his brother to southern California to attend the University of Southern California, where he was a member of the Trojan Band and marched in the Rose Bowl Parade on January 1, 1932. Mr. Morris returned to St. Louis and graduated from Washington University in 1936 with a BS in Mechanical Engineering. He was then commissioned to the U.S. Army Reserve. In 1936, he married Barbara Gene Hart. Mr. Morris worked for Monsanto Chemical Co., in Missouri and Massachusetts. During WWII, he was assigned to TNT production for Longhorn Ordinance Works, in Karnak, TX. After the war, he worked at Monsanto, in Texas City, TX. He survived the Texas City explosion of April, 1947, and was involved in the rebuilding of the plant and contributed much to the understanding and history of the Disaster. His career continued at Monsanto, and he eventually became the VP of the Organic Division. In the mid-1960s, he became CEO of Wheeling Steel Co. In the late 60s, he went to California for the creation of Norton Simon, Inc. In 1971, he became VP of Northwest Industries and CEO of Velsicol Chemical. After retiring in 1978, he became a Federal Bankrupcy Trustee and the owner/manager of Ambiance Restaurant. In 2000, he moved to Asheville, where he was a resident of the Grove Arcade Building. Mr. Morris maintained an active and independent financial trading operation until his death. In addition to his parents, Mr. Morris was preceded in death by his brother, Barney, his sister, Lutie, his wife and mother of his children, Barbara Gene Hart, and his son, Jon Robert Morris. Mr. Morris is survived by his daughters, Susanne M. Glasscock and husband Melbern, of Houston, TX, and Pamela M. Young, of Columbia, SC; wife, Frances Lee Morris; grandchildren, Anne Elizabeth, David, Burke, Amanda, Elizabeth, and Rachel; and great-grandchildren, Larkin, Kyrie, Dexter, and Lorelei. A memorial service with Asheville neighbors will be held on Thursday at 4:00 p.m. in the Groce Funeral Home chapel on Patton Ave. The family will receive friends following the service at the funeral home. A service in Texas will be held at a later date. Memorials may be made to the Building Fund for the Susanne Glasscock School of Continuing Studies, Rice University, P.O. Box 1892, Houston, TX, 77251-1892.