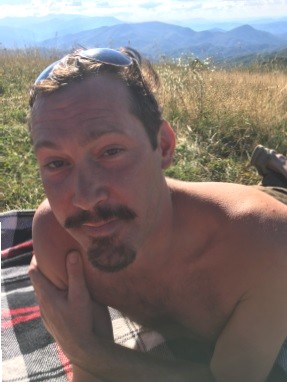 Nate was born on January 9th, 1978 in Atlanta, GA to Brenda and Bob Green. He grew up in Avondale Estates with his brother Josh.

He moved to Asheville, NC in 1996 after graduating high school.

He became a master woodworker, working under his then father-in-law Carl Giesenschlag (at Wildwood Studios) for over a decade. He then started his own studio (N8 Studios) and a community of artists (French Broad School Studios) over the last decade of his life.

Nate is survived by his wife Kelly, mother Brenda, step father Bill, brother Josh, his three amazing kids (Ethan, Olivia, and Levin), and many loving family members and friends who miss him dearly.

Family and friends are invited to attend a service at Groce Funeral Home located at 1401 Patton Ave Asheville, NC 28806 on Saturday, April 23 at 4pm, followed by a celebration of his life at Fallout ArtSpace located at 475 Fletcher Martin Rd. Alexander, NC 28701.

In lieu of flowers, the family is asking for donations to Fallout ArtSpace, Nate and Kelly’s non-profit.