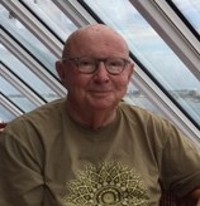 Robert “Bob” Weiler, 79, of Biltmore Forest, died Tuesday, January 23, 2018 at his residence. A native of Chicago, IL, he was a son of the late Kenneth and Ruth Smith Weiler. He was also preceded in death by his first wife, Lucretia Anne Weiler, as well as a step-daughter, Therese Pfaeffle. Bob graduated from The McCallie School in Chattanooga, as well as the University of North Carolina at Chapel Hill, with a Bachelor of Arts and Bachelor of Laws. He served as Vice President of Wachovia Bank for 13 years, spent 3 years as CFO of Coca Cola Bottling Company of Asheville, founded Fugazy Travel in 1978 and served as past President of The Asheville Symphony. In 1974, Bob was an integral part of a Central United Methodist Church Sunday School Class that founded CARING for Children, which is now a part of the Eckerd Connects network. Bob remained committed to CARING for Children for his entire life, serving on the Board of Directors and as President of the Board for multiple terms. Bob’s vision and commitment to providing high quality programs and services for Buncombe County’s most needy children and families was instrumental in guiding CARING for Children’s growth from serving 50 children per year to serving more than 2000 children and families annually. During the transition of directors, Bob was an incredible important bridge. His guidance and encouragement made sure that the 40 years of CARING culture was transitioned for the next chapter of helping youth and families. As a member of the Advisory Board, ambassador and biggest patron of the ‘John Lauterbach’ Scholarship, Bob continued to show the leadership that helped CARING serve so many. Bob was a friend and confidante who could always be counted on for a word of advice or support. He is survived by his wife, Virginia “Ginny” Weiler; one daughter, Leigh Young (David) of Asheville; one step-daughter, Gina Oakley (Guy) of Cobleskill, NY; one step-son, Christopher Pfaeffle (Sally) of Townson, MD; seven grandchildren, Ashley Neal (Nate), Kathryn Galla (Scott) and Mary Victoria Young and Jordan Schermerhorn (Corey), Justin Oakley, Ben Pfaeffle and Zac Pfaeffle, as well as two great-granddaughters, Carolina Neal and McKinley Louise Schermerhorn. An informal gathering for family and friends to celebrate Bob’s life will be held from 3:00-5:00 PM on Friday, January 26, 2018 at Groce Funeral Home at Lake Julian. In lieu of flowers, please consider making a contribution in Bob’s memory to the Asheville branch of CARING for Children (www.caring4children.org).