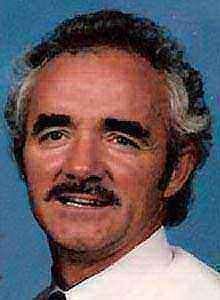 Ronald Thomas Rhymer, 66, of 20 Green Valley Road, Asheville, was called home to be with the Lord on Saturday, April 29, 2006, at Asheville Specialty Hospital following a brief and courageous battle against a brain tumor. A native of Buncombe County, he was a son of the late Roy Thomas and Frances Creasman Rhymer. Following four years of service in the US Air Force, Mr. Rhymer retired from Bell Distributing Company (BellSysco) after 36 years of service, primarily in sales. He then went on to work for US Food Service and IJ Company for three years each. More recently he worked with Lawn Doctor with his son-in-law, Keith, for four years. He was a member of West Asheville Baptist Church and Harry Fisher’s Sunday School class. Mr. Rhymer was a dedicated and loving husband and father whose family was most important in his life. He was a hero to his daughters and will be greatly missed by all who knew him. Survivors include his loving wife of 47 years, Judy Wallen Rhymer; two daughters, Dawn Rhymer Hinson of Asheville and Rosalind Rhymer Fisher and husband Keith of Canton; three sisters, Barbara Hall and husband Alvin of Candler, Shirley Ownbey and husband Gene of Winston Salem and Joanne Jones and husband Joe of Candler; a brother, Danny Rhymer and wife Charlotte of Clyde and grandchildren, Kylie and Lacie Fisher, who loved their “Pappy.” Funeral services will be 2:00 pm Tuesday in the Patton Avenue chapel of Groce Funeral Home with the Revs. David Tucker, Darren Browning and Scott Shields officiating. Burial will follow at Forest Lawn Memorial Park with Harry Fisher, Bill Wallen, Gene Ownbey, Ted Pressley, Johnny Bowman, Danny Maynard and Joe Brown serving as pallbearers. His family will receive friends from 7:00-8:30 pm Monday at the funeral home. Because of his love for animals, his family requests that, in lieu of flowers, memorials be made to Buncombe County Humane Society, 72 Lee’s Creek Road, Asheville, NC 28806.