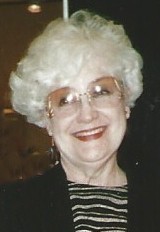 Rosalind Harris Boss, 84, of Asheville, died on Saturday, January 23, 2016, at Aston Park Health Care Center. A lifelong resident of Asheville, Mrs. Boss was raised in Kenilworth by her parents, William O. and Nell Mosseller Harris. She was also preceded in death by her siblings, Bill & Don Harris. Named Miss Asheville in 1953, Mrs. Boss graduated from Lee H. Edwards High School, then studied interior design at Bob Jones University. Design was a lifelong passion for Mrs. Boss. She designed all of her own pageant gowns and swimsuits, and later in life found joy in helping others with their clothes and make-up while working at Belk's, for whom she also modeled. She had also spent time working as a legal secretary for North Carolina Senator Bob Swain, and as a courtroom stenographer. She was a member of Mt. Pisgah Seventh-day Adventist Church. Mrs. Boss is survived by her daughters, Donna Robertson and husband Glen, of Candler, and Rena Overby Bacon, of Asheville; sister, Betsy Evans; grandchildren, Derek, Megan, Nicole, Ryan, Steven, and Christopher; and great-grandchildren, Jayda, Angelina, Bayleigh, and Oliver. A funeral service for Mrs. Boss will be at 3:00 p.m. on Saturday at the Groce Funeral Home chapel on Patton Ave. with Pastors Jonathan Michael and Will Lebrenze officiating. Interment will follow at Green Hills Cemetery. Her family will receive friends for one hour prior to the service. Flowers are appreciated or memorials may be made to Memory Care of Asheville, 100 Far Horizons Lane, Asheville, NC 28803 or at https://www.razoo.com/us/story/Memorycare