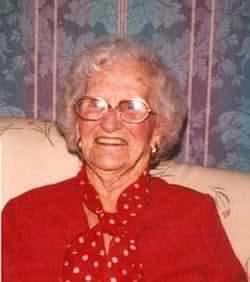 Ruby Cole Brown, 95, of Leicester, died Sunday, August 6, 2000 at Pisgah Manor Nursing Home. A native of Buncombe County, she was the daughter of the late Jasper H. and Amanda Gorman Cole. She was also preceded in death by her husband Jeter H. Brown and was a member of Zion Hill Baptist Church. She is survived by her sons and daughters-in-law, Wayne and Barbara Brown of Leicester, Winfred and Betty Brown of Candler; five grandchildren and nine great-grandchildren. Funeral services will be 11:00 a.m. Wednesday in the Patton Avenue Chapel of Groce Funeral Home. Revs. Jackie Collins and Mike Scroggs will officiate with burial following in Bell United Methodist Church Cemetery. Her family will receive friends 7-8:30 p.m. Tuesday at the funeral home. Memorials may be made to Zion Hill Baptist Church Building Fund, 1008 Newfound Rd., Leicester, NC 28748.