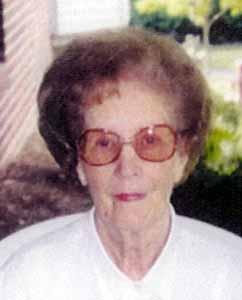 Ruby Smathers Young, 82, formerly of 20 Campbell Circle, Asheville, died Tuesday, December 28, 1999, in an Asheville hospital. Mrs. Young was born in Ware Shoals, SC, was a daughter of the late Floyd G. and Ida Nease Smathers, and was married for 54 years to Robert Ted Young who died in 1995. She had been a member of Biltmore Baptist Church since 1953 where she taught the five-year-old Sunday School Class for 15 years. She is survived by a daughter and son-in-law, Patricia Y. and Michael S. Whiteside of Fletcher; a son and daughter-in-law, Thomas W. and Darlene M. Young of Fairview; and four grandchildren, Brian and Julie Whiteside and Robert and Greg Young. Funeral services will be at 3:00 pm Thursday in the chapel of Groce Funeral Home at Lake Julian with the Rev. Dr. Ian Walker and Rev. David Spray officiating. Burial will be at Piney Mountain United Methodist Church Cemetery, Candler. In lieu of flowers, memorials may be made to the Biltmore Baptist Church Homebound Ministry or New Building Campaign, 980 Hendersonville Road, Asheville, NC 28803.