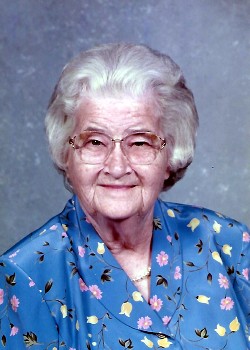 She was the wife of the late Wayne Mathews. She was the daughter of the late W.E. Whitaker and Dorcas Dotson Whitaker. Two brothers proceeded her in death, Wesley Whitaker (Leta) and Roland Whitaker (Ruby Lee). She is survived by a sister, Mary Ella Wolfe (Jim, deceased).

Not only did Ruby raise her family, she retired from Kellwood Mfg. with 27 years of service. She attended Oteen Baptist Church until she became too ill to go.

Special thanks to a niece, Charlene Mathews, who not only came to visit her aunt but cared for her while she was here. And to her nephew, Darren Wolfe, who also took time to visit with her and take her for rides when it became difficult for her to get out.

Graveside services will be held at 2:00 p.m. on Sunday at Green Hills Cemetery, with Pastor Steve Morrison officiating.

For those wishing to pay their respects, Mrs. Mathews will lie in repose from 10:00 a.m. to 5:00 p.m. on Saturday at Groce Funeral Home, Patton Avenue.