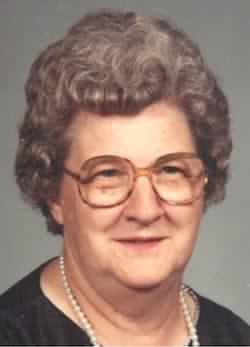 Ruth Fletcher Pressley, 80, of 143 Milk Sick Cove Road, Candler, died Wednesday, October 2, 2002, in an Asheville hospital. Mrs. Pressley was born in Buncombe County and was a daughter of the late Ambrose and Nova Norris Fletcher. She was a former designer for Knollman-Pinner Florist and was a member of Pole Creek Baptist Church. She is survived by her husband, Marlen W. Pressley; two daughters, Carolyn Sams of Oakley and Edith Clement of Candler; a son, Paul W. Pressley of Asheville; two sisters, Mary Lou Hyatt and Martha VanHook of Candler, seven grandchildren, and three great-grandchildren. Funeral services will be at 2:00 pm Friday at Pole Creek Baptist Church with the Revs. Dennis Thurman and G. W. Jameson officiating. Burial will be at Snow Hill United Methodist Church Cemetery. Her family will receive friends from 7 - 8:30 pm Thursday at Groce Funeral home on Patton Avenue where Mrs. Pressley will remain until being placed in the church 30 minutes prior to the service.