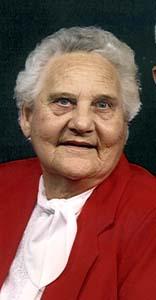 A native of Buncombe County, she was the daughter of the late William and Lillian Creasman Sharpe, Sr., and the wife of the late Joseph E. Branch, who died in 1991.  She was also preceded in death by a son, Stanley E. Nelson and a daughter, Wanda Kaye McDowell.  She was a retired employee of Steelcase.

She is survived by a daughter, Sandra Barnwell and her husband Carroll of Arden;  a sister, Margaret Bryson of Asheville;  a brother, William K. Sharpe of Mills River;  five grandchildren, William Ronnie Presley of Asheville, Shelly Maddox of Fairview, Landon McDowell and Jeff McDowell of Arden, and David Nelson of Tulsa, OK;  and five great-grandchildren, Courtney, Sydney, Morgan, Alexander, and Kayli.

Funeral services will be at 2:00 pm Thursday in the Patton Avenue chapel of Groce Funeral Home with the Rev. G.A. McCurry officiating.  Burial will be in Ashelawn Gardens.

Her family will receive friends from 7 - 8:30 pm Wednesday at the funeral home and at other times will be at Sandra's home, 40 Davis Road, Arden.