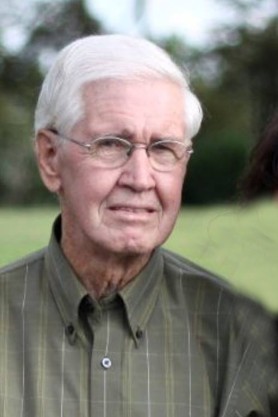 William Sherman Dotson, 86, of Concord Road, passed away Wednesday, March 2, 2016. A native of Buncombe County, he was the son of the late John H. and Bertsie Briggs Dotson and husband of the late, Jessie Riddle Dotson, who passed away in 2005. He was also preceded in death by two sisters, Willie Mae Wilson and Frances Dotson Souther, a brother, John B. Dotson and a grandson, Yates Jordan Lineberger. Sherman was a graduate of Fairview High School, served in the National Guard and was a founding member of Faith Chapel Baptist Church. At the age of 19 he opened Dotson's Hardware, Gas and Grocery. In 1970 he received a degree in horticulture and opened Dotson's Greenhouse and in 1975 Dotson's Flowers. He continued delivering his flowers until last year. He led a beautiful life by helping those who were in need. He is survived by three daughters, Connie Queen and her husband, Tommy, of Saluda, Kathy Lineberger and her husband, Leon, of Dallas, NC and Amy Brady and her husband, Steve, of Fletcher, one son, Barry Dotson and his wife, Rena, of Fletcher; three sisters, Desma Young of Fletcher, Barbara Peterson and her husband, Robert, of Asheville and Jean Thomas of Asheville; one brother, Wib R. Dotson and his wife, Nancy, of Hendersonville; 16 grandchildren, 10 great-grandchildren and 19 nieces and nephews. A funeral service will be held at 3:00 pm Sunday in the chapel of Groce Funeral Home at Lake Julian conducted by the Rev. Dan King. The family will receive friends for one hour prior to the service and burial will follow in Tweeds Chapel Cemetery. At other times the family will be at the home of Barry Dotson, 806 Concord Road, Fletcher. Memorials may be made to Hospice of the Carolina Foothills, 260 Fairwinds Road, Landrum, SC 29356.