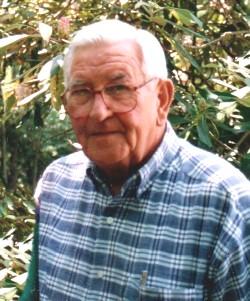 STANLEY HENRY RIDDLE, JR. CHARLOTTE – Stanley Henry Riddle, Jr., 87, died Monday, May 30th, 2011, at the Carriage Club in Charlotte, NC. He was born July 3, 1923, in Asheville, NC. He was a son of the late Naomi Sutton Riddle and Stanley Henry Riddle, Sr. He was also preceded in death by his wife Elinor Harrison Riddle, who died in 1991; he married Evelyn Rollins Riddle in 1993, who died in April 2010; and also preceded by a sister, Josephine Farnham. Mr. Riddle was a graduate of Lee Edwards High School and attended Asheville Buncombe College. He served his country in the U.S. Air Force during WW2 and the Korean Conflict. He worked at Sears Roebuck and Co. for 37 years, having retired in 1985. He spent time between Tampa, FL and Asheville after marriage to Evelyn Rollins Riddle in 1993. He and Evelyn moved to the Carriage Club in Charlotte in 2009 where he lived until his death. He is survived by children Shirley Glenn Riddle of Woodruff, SC, and Patricia Riddle Foster and husband Morgan of Charlotte, NC; step-daughter Marsha Rigney and husband Mike of Milwaukee, WI, and her family; sister Nancy Hudson and husband Tom of Gaston, SC; great-aunt Mabel Greene of Gastonia, NC; also survived by several nephews and cousins, and by special friends Lou and Betty Jo Trantham and Jeanne Lance, all of Asheville. The family would like to express their appreciation to the second floor nursing staff of Clare Bridge Place in Charlotte for their kind and considerate care of Mr. Riddle during the past year. Also, to Frances Schutte, RN, Jill Martino, MSW and Allison Rizk of Hospice and Palliative Care of Charlotte. A memorial service for Mr. Riddle will be held at 1:00 p.m. Saturday, June 11, at Groce Funeral Home on Patton Avenue, with the Rev. Stan Welch officiating. The family will receive friends one hour prior to the service. In lieu of flowers, memorials in memory of Stanley Riddle may be made to Memory Care, 100 Far Horizons Lane, Asheville, NC 28803, and/ or to Hospice and Palliative Care, Charlotte Region, 1420 East 7th St., Charlotte, NC 28204.