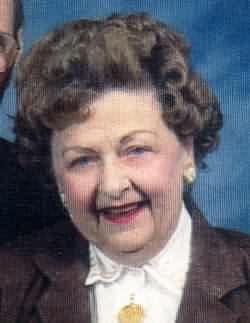 Sylvia Twiford Fogg, formerly of Asheville, died December 21, 2003, in Casa Grande, AZ. Mrs. Fogg was a native of Asheville and lived here until 1966, when she was promoted to the corporate headquarters of Gerber Products Co., in Fremont, MI to become the editor of company publications and company historian. She established the first company archives. She had first joined Gerber’s in 1958 when construction began on the Asheville plant and took early retirement after 20 years with the company. While in Asheville Mrs. Fogg was active with many civic projects and was the recipient of a Presidential award for her work with Hire the Handicapped. Delta Airlines awarded her with the Order of the Flying Orchid and she was included in Foremost Women in Communication, 2000 Women of Achievement (published in England), and several editions of Who’s Who of American Women. She served as organizing president of the David Vance Chapter, Children of the American Revolution, and was active in music circles, civic theater, and the Business and Professional Women’s Club. She began her career as a writer serving as a correspondent for the Asheville Citizen during her high school years. She was the great-granddaughter of Civil War Brigadier General (and congressman) Robert V. Vance and the niece of the late Buncombe County Commissioner John C. Vance. She moved to Casa Grande, AZ in 1984 and became active in various organizations there. She served on the boards of directors of Against Abuse, Inc., the Pinal County Fine Arts Council, and the GFWC Women’s Club of Casa Grande. She is survived by her husband, Daniel A. Fogg, P.E., one daughter, Nancy Carr Sumner Porter of Dallas, NC; one step-daughter Marcie Fogg Manley of Chico, CA, and five grandchildren. A memorial service is scheduled for 2:00 pm. Wednesday, April 14, at Grace Episcopal Church, Asheville, with the Rev. Gary K. Coffey officiating. Graveside rites for Mrs. Fogg were held December 23, 2003, at Riverside Cemetery. Memorials may be made to Grace Episcopal Church, 871 Merrimon Avenue, Asheville, NC 28804 or to Against Abuse, Inc., PO Box 10733, Casa Grande, AZ 85230.