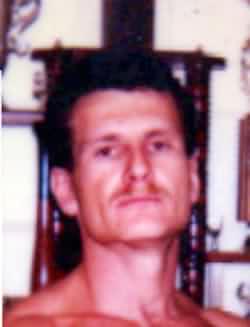 Terry Bruce Baldwin, 45, formerly of Asheville, died Tuesday, May 31, 2001, in Raleigh, following an extended illness and is now at rest.

Mr. Baldwin was born in Buncombe County and was a son of the late William J. Baldwin, Sr., and Dorothy Murray Baldwin. He was a mechanic who had a special fondness for Harley-Davidsons. He was a former NC State champion weightlifter.

He is survived by his son, Terry Baldwin of Charlotte; one sister, Patricia Harris of Rock Hill, SC; two brothers, Joe Baldwin of Asheville and Steven Baldwin and his wife Vanette of Asheville; a special loving friend, Wanda Baldwin of Asheville; special kin, Bubba, Tootie, Tony, Jennifer, Michael, David, April and Heather; and several aunts, uncles, and many cousins.

A memorial service will be at 4:00 pm Monday in the Patton Avenue chapel of Groce Funeral Home with the Rev. Bill Plemmons officiating. Private burial will be at New Salem Cemetery.

His family will receive friends immediately following the service and request that memorials be made to Mountain Area Hospice or to the American Cancer Society.