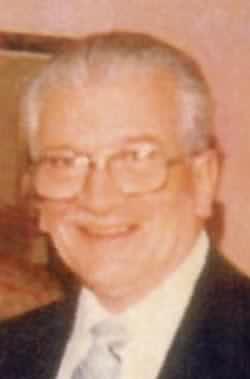 Thomas P. Simihtsi, 94, of 168 Monticello Road, Weaverville, died Sunday, February 1, 2004. Mr. Simihtsi was born in Thesolynikia, Greece and came to the United States with his family when he was 8 years old. He served in the US Army during WW II. He owned food stores in Brooklyn and Long Island, NY before coming to Asheville in 1950 and operating Tom’s Food Market on Merrimon Avenue from 1950 until 1985. He was a member of Holy Trinity Greek Orthodox Church and of the Fraternal Order of Police. He is survived by one daughter, Angela Reese and her husband Alan of Weaverville; one son, Michael Thomas Simihtsi and his wife Sarah Wing Simihtsi of Mt. Airy; four grandchildren, Adam, Joseph, Olivia and Jacob Reese; and a brother Johnny Simihtsi of Montgomery, NY. Military graveside rites will be conducted by the Buncombe County Veterans Council at 2:00 p.m. Wednesday at Fairview Sharon Cemetery with the Rev. C.W. Anthony officiating.