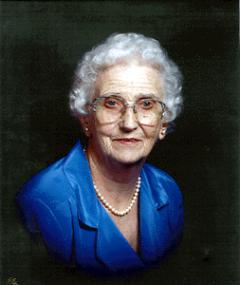 Mrs. Hill was born in Buncombe County, March 23, 1919, and was a daughter of the late Chester M. and Rosa Peeples Morgan.  She was married to Herbert L. Hill, who died in 1980, and was  retired after more than thirty years with the Orthopedic Appliance Co. She was a member of White Rock Baptist Church.

She is survived by four sons and daughters-in-law, Chester A. and Irene Clontz Hill of
Candler, Bennie L. and Aretha Robinson Hill of Candler, Robert E. and Ann Michels Hill of Laurens, SC, and J. Sherrill and Brenda Denny Hill of Claremont, NC;  twelve grandchildren and twelve great-grandchildren.

Funeral services will be at 2:00 pm Tuesday at White Rock Baptist Church with the Rev.  Richard Kinsland and two of her grandsons, Dan Gasperson and George Gasperson officiating.  Burial will be in the church cemetery.

Her family will receive friends from 7 - 8:30 pm Monday at Groce Funeral Home where Mrs. Hill will remain until being placed in the church 30 minutes prior to the service.

Memorials may be made to White Rock Baptist Church and/or the Upper Hominy Fire Department and Rescue Squad.