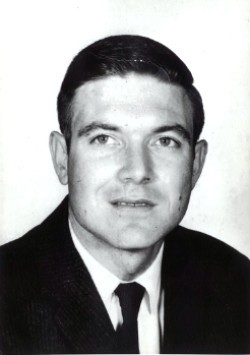 Virgil G. Burch passed away at his home on Monday May 5th, 2014. His childhood was spent on a farm in South Georgia. He attended college at the University of Georgia and graduated with a BS in Pharmacy in 1960. Virgil was a Pharmacist in Asheville, NC for over 25 years, first at Trantham's Drugs on Broad Street in downtown Asheville and then at Burch Beverly Hills Drugs on Tunnel Rd. in East Asheville. He spent his retired years on the small farm he loved in Fairview, NC, gardening, cutting the pasture, eating peanuts, rocking on the front porch and spending time with his family and grandchildren teaching them how to grow anything and everything. He led a simple life and was simply the very BEST Dad. Virgil is preceded in death by his parents, Ira and Idona Burch, as well as his brothers Edison Burch and Euen Burch. He is survived by his two sisters, Reba Brown and Retha Mathis, his wife of 57 years, Miriam C. Burch, and his four children, William Christopher Burch, Sadie Teresa Ward, Virgil Kevin Burch and Miriam Rene' Severson as well as seven grandchildren. The family will receive friends on Monday May 12th at 1:00 pm at Platt's Funeral Home in Augusta, GA. Graveside service and interment will follow at 2:00 pm in West View Cemetery. Groce Funeral Home on Patton Avenue is assisting the family.