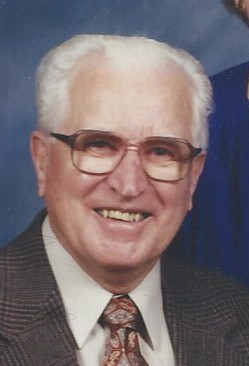 Wade B. Roberts, 94, went to be with his Lord and Savior on Friday, November 21, 2014, at his home. He was one of nine children born in Madison County to the late Lorenzo Dow and Arrie Worley Roberts. In 1940, Wade moved to Buncombe County and met Flora Mae Wright, married her and they lived 72 years devoted and happy. They raised a beautiful family together, remaining together until April 29, 2014, when Flora went to be with the Lord. Wade was a World War II veteran, and participated in the Normandy invasion. He served three years in Europe. Wade loved his country and was proud to have served. He was a master woodworker and made many beautiful pieces of furniture for family and friends. He retired from Ethan Allen as Quality Control Manager. Wade also loved working in his garden and sharing the bounty of his harvest with others. He passed along this love and knowledge to his family. Wade was a member of Victory Baptist Church where he served as Deacon, Sunday school teacher and member of the Sunshine Club. Wade loved the Lord and now his faith is sight. Left to cherish his memory are his daughter, Peggy Roberts Lance and husband Sheldon, of Candler; granddaughters, Kim (Kimmy) Lance Hartless and husband Kevin, of Forest, VA, and Karena (Reenie) Lance McCoy and husband Jon, of Candler; great-grandchildren, Savannah, Connor and Carson Hartless, and Jake and Andrew McCoy; sister, Edith Rhodarmer and husband Bruce, of Jacksonville, FL; and brother, Bob Roberts and wife Hilda, of Houston, TX. Funeral services will be at 1:00 p.m. Tuesday in the Patton Avenue chapel of Groce Funeral Home with the Revs. Larry Sprinkle and Danny Gasperson officiating. Interment will follow at Forest Lawn Memorial Park. His family will receive friends from 6:00 to 8:00 p.m. Monday at the funeral home and at other times will be at the home of Peggy and Sheldon Lance. Flowers will be appreciated and accepted, or memorials may be made to Blue Ridge Broadcasting, 106.9 "The Light", P.O. Box 159, Black Mountain, NC 28711.