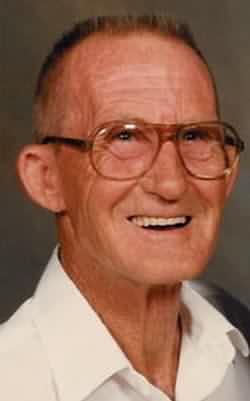 Warren G. “Papaw” Brock, 79, of 341 Beaverdam Loop Road, Candler, went to be with the Lord on Wednesday, December 11, 2002, his fifty-ninth wedding anniversary, at his residence with his family and friends by his side. Mr. Brock was born in Fort Gaines, GA on August 8, 1923 and was the son of the late Andrew Jackson and Elsie Mae Brock. He was also preceded in death by a son, Warren G. “Little Tanker” Brock, Jr. and by a brother, Grady Brock, who was his fishing buddy. He lived most of his life in Buncombe County. He graduated from Candler High School in 1943 and served in the US Army during World War II as an Army medic. He was employed by American Enka for 37 years and retired in 1985. He then worked with RV Warren Farms for 16 years. He loved his family, working in the garden and the fields, going fishing with the “guys” and playing in the yard with his grandchildren and great-grandchildren. Mr. Brock is survived by his loving wife Lillian Guy Brock; a son, Ronnie Brock and his wife Susan; three daughters, Carolyn Whitted and her husband Bill “Whitt”, Beth Warren and her husband Lonnie “Biggie” and Linda Greene and her husband Dan and a sister, Helen Massie, all of Candler; five grandchildren; six great-grandchildren and three step-great-grandchildren whom he loved with all his heart and who loved him with all their hearts. Graveside services will be 11:00 am Friday at Forest Lawn Memorial Park with the Revs. Robert E. Harris and Jackie Collins officiating. Pall bearers will be Mark Whitted, Todd Whitted, Mike Johnson, Steve Parris, Scott Guy and Tony Roseborough. The family will receive friends from 7:00-9:00 pm Thursday at Groce Funeral Home on Patton Avenue. Flowers will be appreciated or memorials may be made to Mountain Area Hospice, PO Box 25338, Asheville, NC 28813. The family wishes to express their appreciation for the wonderful care and concern from Mountain Area Hospice, from everyone at RV Warren Farms and all his friends.