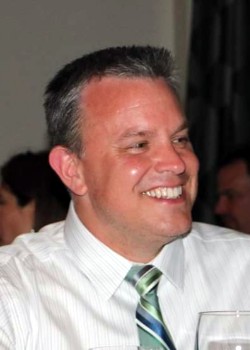 Wayne Alan Montgomery, 51, of Morrisville, NC, died in Duke Raleigh Hospital on Thursday, August 25, 2022 after a courageous battle with cancer.

Wayne was saved through faith in Christ as a teen and became a member of Pole Creek Baptist Church through believer’s baptism. Active in countless sports and other school activities, Wayne grew up in a loving family in Candler, NC. The Montgomery family spent their summers on the ballfield, in a pool, or fishing and skiing at the lake. Many hours were also spent working puzzles, playing ping-pong, or playing cards, especially a lively game of Rook. Wayne was an avid Atlanta Braves and college basketball fan from childhood. He also began following professional tennis at an early age. In college, he developed a love for the fast-paced Stanford volleyball teams. Wayne was considered a die-hard Duke basketball fan, and he often took advantage of any opportunity to attend a game or plan a vacation around one. He once followed the Blue Devils from Madison Square Gardens to Las Vegas in the same week long vacation. He occasionally snagged a few tickets to games at Cameron Indoor Stadium and loved for his mom and sister to join him.

After graduating from Enka High School with honors, in 1989 Wayne moved to the Raleigh area to pursue a degree from NC State University where he met lifelong friends in the NCSU volleyball club. Wayne played sports with no fear. He wasn’t one to talk smack to his competitors. He simply kicked their butt and asked, “Where are we going for dinner?”

Wayne had an infectious laugh, surpassed only by his quick wit and loving personality. Wayne’s friends never questioned his love because he was not afraid to let them know. Wayne had a keen sense of knowing when to show up with a warm hug when he was needed…no matter the distance he had to travel.

Over the years, Wayne was a highly skilled, detail-oriented IT business professional employed by IBM and Lenovo. In his short life, Wayne lived life as if he were retired. As a Global Team Leader, he traveled all over the world, to India, Taiwan, Argentina, and Eastern Europe, where he fell in love with Vienna, Austria. Wayne loved to travel and set sail on luxury cruise ships, and has been to such beautiful destinations as Greece, Croatia, Italy, Turkey, Mexico, the Caribbean, Alaska, and Canada. Wayne also had a passion for casinos, culinary adventures, as well as Trivia Nights and bowling. In recent years, Wayne loved playing adult dodgeball and kickball with his buddies in the Stonewall and Clubwaka leagues. His teams won many local and state championships.

Wayne was preceded in death by his loving parents, Hoyt Glen Montgomery and Barbara Coffey Montgomery, and his sister, Donna Lynn Montgomery. Wayne is survived by his faithful and loving sister, Suzanne “Suzie” Montgomery of Asheville, his cherished pets Flash and Tiger, as well as many aunts, uncles, cousins, and friends who loved him.

The family is exceedingly grateful to all the friends who helped Wayne navigate through his courageous battle with cancer.

The family will receive friends at Groce Funeral Home on Patton Ave in Asheville on Friday, September 9, 2022, 12:00 p.m. to 2:00 p.m. A graveside service will immediately follow at Forest Lawn Memorial Park in Candler.

Family and friends will be gathering afterwards at Stoneridge Tavern on Brevard Rd in Asheville to share memories of Wayne’s beautiful life. All are welcome.