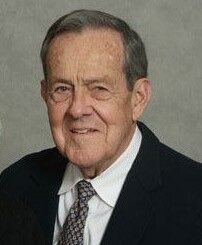 Dr. Montgomery was born on April 21, 1925 to the late Frank and Mildred Montgomery in Battle Creek , Michigan. He attended public schools in Madison, Indiana. He graduated from DePauw University in Greencastle, Indiana with help of the Rector Scholarship. Wayne was a member of Phi Kapa Psi fraternity- and it was at DePauw where he caught the eye of Betsy Campbell Jeschke. In high school and college he participated in varsity basketball and baseball. While in high school, he was offered a baseball contract with the Boston Red Sox from Herb Pennock, farm supervisor for the Red Sox.

Wayne graduated from Wayne University medical school in 1950 in Detroit, Michigan, where he was a member of Phi Rho Sigma. Following both an internship and a year as assistant surgical resident at Harper Hospital in Detroit, Wayne accepted a three-year fellowship in orthopedic surgery at Campbell Clinic, Memphis, Tennessee. In 1955, he accepted Dr. Walter Watt’s offer to join his practice which became Blue Ridge Bone & Joint Clinic, where he continued seeing patients through 1993.

Wayne coached Little League baseball for six years, serving as president of the league 1961-1962. He served as on-site orthopedist for the Atlanta Falcons in their first summer camp in Asheville in 1965. Betsy and Wayne swam Monday through Friday in their indoor pool at home, with Wayne usually swimming one-half mile and Betsy swimming one-mile.

Entering the political arena, Wayne was chair of the Buncombe County Republican Party from 1965-1969. In 1969 he was elected Mayor of the city of Asheville, serving until 1971. Then from 1984 to 1988 he served as a Buncombe County Commissioner.

From 1973 to 1985 Wayne served on the Davidson College Board of Trustees, and from 1973 to 1976 on the North Carolina Department of Transportation Board. Service on other boards include American Red Cross, American Cancer Society, Buncombe County Board of Health and the Black Mountain Home for Children. Wayne served as president of the Boards of UNCA Foundation, Mountain Amateur Athletics, Asheville Kiwanis Club, Land of Sky Touchdown Club, Western North Carolina Tennis Association, Knights of the Laurel in the Rhododendron Royal Brigade of Guards. Wayne and Betsy were member of First Presbyterian Church, Asheville, NC for many years.

A celebration of his life will be held starting at 10:00 AM on Saturday, April 22, 2023 in the Chapel of Groce Funeral Home at Lake Julian. His family will greet friends at the funeral home immediately following the service.

In lieu of flowers, memorial contributions may be made to Black Mountain Home for Children, 80 Lake Eden Road, Black Mountain, NC 28711, or to Brooks Howell Home, 266 Merrimon Ave., Asheville, NC 28801.

The Montgomery family wishes to thank the Staff at Brooks Howell for its extraordinary care.