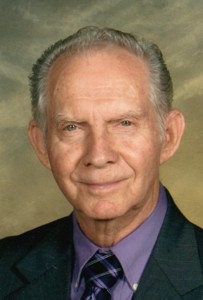 William Earl Hamby, born October 31, 1928, went to be with his Lord and Savior on Wednesday, May 19, 2010, with his beloved family at his side. Mr. Hamby was a native of Booneville, NC, and was a son of the late Rev. Grady and Martha Hamby. He lived in Lenoir and Banner Elk until he became a teenager, when he moved to Boone, which he always called home. He served in the US Air Force from 1948 to 1952. Upon his return to the US he was stationed at Cape Canaveral, where he was instrumental in preparing for the First Manned space flight. Mr. Hamby was a building contractor and was a member of the VFW and of Beverly Hills Baptist Church and the Winmore Sunday School Class. He was preceded in death by two sisters, Edna McCracken and Mabel Ingle and a brother, Allen Hamby. Mr. Hamby is survived by his wife, Reba, who was his best friend and next door neighbor, then wife for 57 years; two sons, William Richard "Rick" Hamby and wife, Bobbi, and Jeffrey Lynn "Butch" Hamby and wife, Holly; four grandchildren, Ethan, Preston, and Garrison Hamby and Jennifer Hamby Ingle; and one brother, Howard B. Hamby of Bossier City, LA. The funeral will be at 1:00 p.m. Friday at Beverly Hills Baptist Church with Dr. William D. King officiating. Burial will follow in the Western Carolina State Veterans Cemetery. The family will receive friends from 7:00 p.m. to 8:30 p.m. Thursday at Groce Funeral Home, East Asheville, 856 Tunnel Road, and again on Friday at the church one hour prior to the service. In lieu of flowers, memorials may be made to Beverly Hills Baptist Church, 777 Tunnel Road, Asheville, NC 28805, or to the American Heart Association, PO Box 5216, Glen Allen, VA 23058.