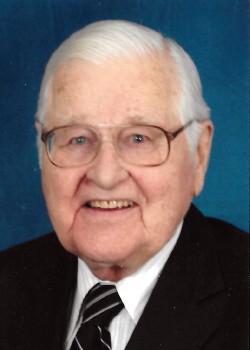 William Lubbeck, born Heinrich Friedrich Wilhelm Lübbecke, died at 7:30 a.m. on Tuesday, June 22, 2021. He was the son of the late Heinrich Friedrich Wilhelm Lübbecke and Margarete Matthies Lübbecke. He was born in Püggen Germany, on June 17, 1920. He attended schools in Püggen and graduated from University in Wolffenbüttel in 1949 with a degree in Electrical Engineering.

William was united in holy matrimony to Anneliese Berndt on December 22, 1945 in Hamburg. Anneliese preceded him in death on December 2, 1988. William, Anneliese and their eldest son Harold emigrated to Canada in 1951. His daughter, Marion, was born in Montreal, Canada, then William and his family emigrated to the United States in 1956 and his son, Ralph, was born in Cleveland, Ohio. William and his family became American citizens in 1961.

William led a full life, enjoying his loving family, his friends and professional peers. He worked in the steel industry, primarily as an Electrical Engineer for Union Carbide’s Arc Furnace division. The technical book he wrote during his career, Electric Arc Furnace Electrode Digest, remains an industry standard. He continued his writing endeavors with a memoir of his World War II experiences, At Leningrad’s Gates, published in 2006. He very much enjoyed interacting with interested readers and those who attended his talks on his experiences.

William’s life is fondly remembered by his children Harold, Marion, and Ralph, and their spouses Cheryl, Craig, and Lisa; his seven grandchildren; and fourteen great-grandchildren.

A memorial service will be held Emmanuel Lutheran Church, Asheville, NC, where he was a member for over 30 years. The service will be led by the Reverend Dr. Michael McFarland, on Friday, June 25th, 2021 at 1:00pm. Internment will follow in the church’s Memorial Garden.

In lieu of flowers, memorial gifts may be made to Emmanuel Lutheran Church.