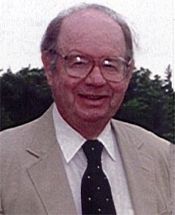 Asheville ~ On Monday afternoon, January 21st, 2002, Dr. William Ray Griffin, Jr. passed away after a brief battle with brain cancer, at the age of 81, in the Hospice care center - Solace.

“Dr. Bill”, as his patients and friends affectionately knew him, was the son of Dr. William R. Griffin, Sr. and Edith Lutz Griffin. Born on June 15, 1920 here in the former Biltmore Hospital, he graduated from Lee H. Edwards High School in 1936, attended Mars Hill College and graduated from Duke University in 1940. From there he moved on to the Jefferson Medical College - University of Pennsylvania in Philadelphia. Upon graduation in 1944, having enlisted in the US Army Medical Corps, he completed his internship and Psychiatric residency during his tour of duty at Army hospitals in Philadelphia, San Antonio, TX, and Battle Creek, MI. He attained the rank of Captain and was honorably discharged.

His service completed, he returned to Asheville in 1948 to join his father and uncle, Mark A. Griffin in the building of Appalachian Hall - a private psychiatric hospital housed in the former Kenilworth Inn in south Asheville. He continued his practice until his retirement as hospital President in 1987 when the hospital was sold to Psychiatric Institutes of America. Caring for patients with all ranges of mental illness, substance abuse and custodial care needs, he was universally loved and respected by his patients, employees and co-workers for nearly 40 years of devoted service.

He met his wife of 58 years, Hilda G. Stoker of Salisbury, while at Mars Hill and is survived by her and a daughter, Karen G. Tinsley and son-in-law, Steven L. Tinsley of Charlotte; a son, William R. Griffin, III and daughter-in-law, Alice W. Griffin of Asheville. In addition are his grandchildren, Kimberly Lynne Tinsley and Lee Griffin Tinsley, of Charlotte, Ashley Griffin Wineinger of Midland, TX and William Ward Griffin of Charlotte, and great-grandchildren, William Cole Wineinger and Hannah Kate Wineinger of Midland, TX. Also surviving are his sister, Virginia H. “Toni” Griffin of Lake Norman and his brother, Dr. Robert A. Griffin of Asheville.

An avid sportsman, he loved the out-of-doors and sought to both enjoy its fruit and preserve its quality. He was an active supporter and very involved in both Ducks and Trout Unlimited organizations.

Funeral services will be conducted by Reverend Ed Graham at 2:00 PM Friday, January 25th, at Central United Methodist Church on Church Street in Asheville. Interment will follow in Calvary Episcopal Churchyard in Fletcher. The family will receive friends at the home of Bill and Alice Griffin on 23 Hampstead Road in north Asheville from 5:30 until 7:30 PM on Thursday, January 24th.