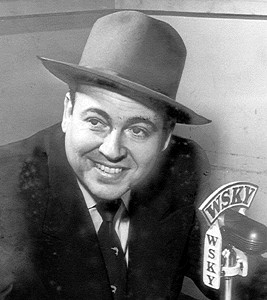 Zeb Lee, longtime radio station owner and announcer, died Saturday, August 1, 1998.  A native of Monterey, Tenn., he was the son of the late Zebulon Porter and Rhoda Speck Lee.
He began his career with WISE Radio in 1939, worked with WPTF in Raleigh, NC in 1941 until entering the Army Air Corps in W.W. II.  He served in Public Relations during the war and upon returning to Asheville, he was one of the founders of WSKY in 1947 and then founded WZLS in 1994.  Always active in sports broadcasting, it is estimated that during his career, he called over 4000 football and basketball games at the high school, college and semi-professional levels.

He was a member of The First Church of Christ, Scientist, Boston, Mass.

Zeb is survived by his wife, Betty Walden Lee; sons, Brian and Barry Lee of Asheville and his brother, Joseph S. Lee of Franklin.

Services will be at 10 a.m. Tuesday in the Western Carolina State Veterans Cemetery.  The family will receive friends from 7 until 8:30 pm Monday at the funeral home on Patton Avenue.